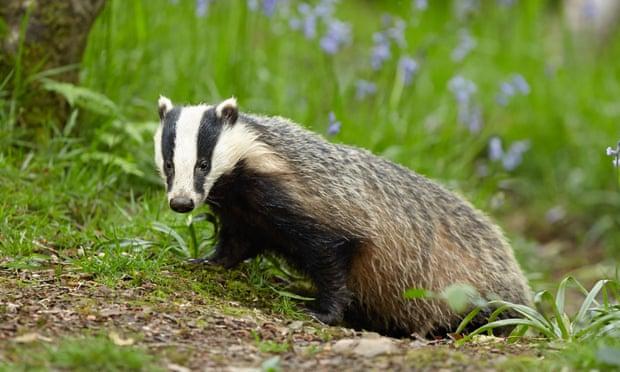 Badgers are nocturnal and rarely seen during the day. When not active, badgers usually lie up in an extensive system of underground tunnels and nesting chambers, known as a sett. Occasionally, when the weather is particularly hot, badgers may briefly come above ground during daytime.

The badger's most important food is earthworms, which are caught on pasture, lawns or in deciduous woodland, especially on wet nights. Other food can include bulbs, insect larvae and small mammals.

Blackberries and windfall apples are major food sources in the autumn.

Badgers frequently come into urban areas to forage, and as urban areas continue to expand, more and more badgers are living closely to built up areas. In gardens they may damage fences, dig up lawns for insect larvae (leather jackets) and turn over dustbins. They may also dig holes to use as latrines often used to marking out their boundaries.

Strong fencing will normally omit all but the most determined animals. Chain Link fencing dug into the ground to about 30-50cms deep and 125 centimetres high is recommended and used by contractors to omit badgers from highways. Gateways and other points of entry need to be secure enough to stop a badger squeezing through or climbing over. Digging in lawns for leather jackets and chafer grubs can be halted by removing this food source, the insect larvae. This can be done by biological controls available from garden centres such as 'Nemasys leather jacket control'. Be careful of advice to use chemical controls that may be damaging to the environment and prove to be detrimental to the soil structure if worms are also killed in the process.

Damage to gardens is often during times of food shortages. One method would be to feed the badgers on scraps during these periods. They are very attracted to peanut butter sandwiches and raisins and supplementary feeding has been used successfully in the past within Gosport but there is a danger that it may also aggravate the problem.

Electric fences have also been used as deterrent; they are easily set up and can be removed quickly. They can protect a whole garden but are more usefully applied around a vegetable or fruit garden.

Advice on electric fencing can be obtained from an agricultural supplies dealer. Care should always be taken when setting up a fence not to endanger other wildlife that may be using your garden and indeed the neighbours pets and children!

In the past rags or ropes were soaked in a repellent such as diesel, creosote or 'Renardine' but experience showed that these methods rarely worked and the use of these substances has now been made illegal!

Badgers and the Law:

Badgers are protected by current legislation including the Protection of Badgers Act 1992 and the Wild Mammals act 1996.

It is illegal to wilfully kill, injure or take any badger or to attempt to do any of these things. It is illegal to cruelly ill-treat a badger and also to have in your possession any dead badger or part of one.

It is an offence to intentionally or recklessly damage, destroy or obstruct access to any part of a badger sett, to cause a dog to enter a sett or disturb a badger while it is occupying a sett.

In some exceptional circumstances for examples where a badger sett is undermining foundations of a building or causing a serious health and safety hazard, a licence may be applied for from DEFRA to carry out exclusion work. Only a licensed Badger handler can carry out this work.

For further information of advice on any of the above points please contact:

It should always be remembered that badgers are part of our rich and diverse wildlife population in Gosport and many clans of badgers have remained in the same area for at least the last hundred years.

They are interesting and relatively harmless mammals that have found the struggle in maintaining foraging areas throughout their territories more and more difficult due to housing development around the South Coast.

A glimpse of this secretive animal as it goes about is evening hunt for earthworms can be an enchanting experience and one that future generations of Gosport's human population should not miss out on.